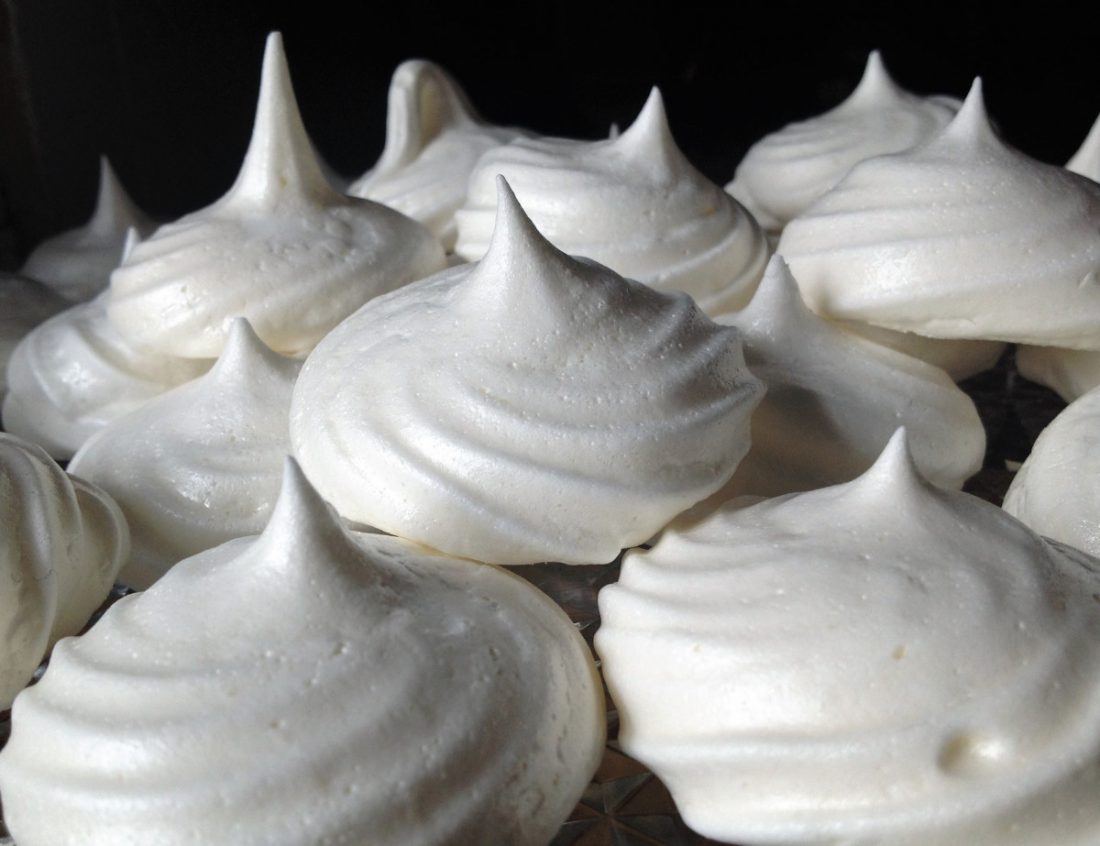 In March 2015, Goose Wohlt, experimenter, engineer and food lover from Indiana in the US, posted a picture of vegan meringues in the Facebook group What Fat Vegans Eat. He said: “Dead simple, delicious, two ingredient, whole food meringues… one can chickpea brine mixed w half cup sugar. perfect-O”. It looked too good to be true and some thought it was a hoax to be announced on April 1!

But it wasn’t a hoax. Goose named the bean juice aquafaba (bean water) and described how you just whisk it up and add sugar, in much the same way as is done for meringue made with egg whites. Soon after, a new Facebook group was started called Aquafaba (Vegan Meringue – Hits and Misses!). In just a few weeks, the group had attracted thousands of members from all over the world whipping up meringues, macarons and Pavlovas. The page currently has almost 90,000 members.

A Google search for aquafaba returns over 300,000 results, it’s been hash-tagged more than 35,000 times on Instagram and there are numerous ‘aquafaba’ cook books describing the many different ways to cook with this novel ingredient that we’ve been pouring down the plughole for years!

Vegans have been waiting in the wings for an easy and simple meringue recipe and here it is. Previous candidates replacing eggs have included banana, apple sauce, pumpkin seeds and flax seeds, but a good replacement for egg whites in meringues has remained elusive. Commercially available egg replacers are available, but they just don’t cut it in meringues.

Vegan food experimenter extraordinaire, Miyoko Schinner, had some success by extracting the mucilage (lignan) from flax seeds. However, flax seed meringues were a bit complicated and unpredictable – the foam doesn’t always hold up and the flavour of flax can be off-putting.

In 2014, Joël Roessel, a ténor from France, had also discovered that the liquid from cooked chick peas could be whipped into a foam and used to make a vegan meringue. He’d been trying to devise a vegan recipe for the French dessert, floating islands – meringues floating on crème anglaise (vanilla custard). Joël said his theory was based on molecular cuisine, science and common sense. However, his recipes were a bit too technical for a wide audience relying on the addition of vegetable gums, starches and stabilisers.

So how does it work? With an egg meringue, it’s the unfolding proteins produced by robust whisking that form the scaffolding structure of the meringue. The gaps in the scaffolding are then filled with sugar molecules. When you heat the meringue, the water evaporates leaving a crispy, crunchy texture. Too much heat causes the water to expand and evaporate too fast making the inside hollow.

Scientists at the Norwegian food research institute, Nofima, analysed aquafaba and found that it contains equal amounts of proteins and carbohydrate but little or no fat. It may be the protein that provides aquafaba with its impressive foaming and emulsifying properties. However, the carbohydrate could also help stabilise the foam by increasing viscosity.

Chick peas (also known as garbanzos) are a legume commonly used in such classics as falafel, hummus and three-bean salad. Some people have had success with the water from other canned beans, such as kidney beans, but chick peas remain the popular choice.

Generally three tablespoons of aquafaba equate to one egg, providing it is the right consistency. It should be a bit gloopy like egg white – not too thick and not too runny. If it is too watery, you can reduce it by heating it to get a thicker consistency and it can be frozen for later use. 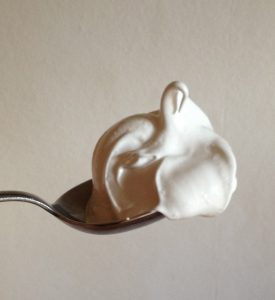 With egg meringue, you’re advised to use a glass bowl because plastic may have traces of fat on it – fatal to an eggy meringue. Fat seems not to be such a problem for aquafaba meringue. Adding a small amount of lemon juice, vinegar or cream of tartar before the sugar, provides acid, which may help slow the newly unfolded proteins binding together and permit even more air to be whisked in.

In my first attempt at whisking up the gooey, viscous water from a can of chick peas, it first went bubbly then thickened, went white and formed peaks – just like egg whites! Be warned, this process takes some time! I then added a small pinch of cream of tartar followed by half a cup of caster sugar – adding a little at a time to avoid collapsing the mix.

The result was a thick and glossy meringue. I piped out little blobs on a sheet of baking paper and baked them at 100°C for two hours and then left them in the oven to cool by just unclicking the door but not opening it. It was astonishing – I had vegan meringues for the first time in over a decade! Sweet, light and deliciously crunchy!

Next I made chocolate mousse – it came out light and fluffy with tiny air bubbles through it! Perfect! Next, I tried mayonnaise. It couldn’t be simpler; aquafaba, mustard, vinegar and salt mixed together in a bowl then, using an immersion blender, I slowly drizzled vegetable oil into it and hey presto – smooth and creamy vegan mayonnaise! 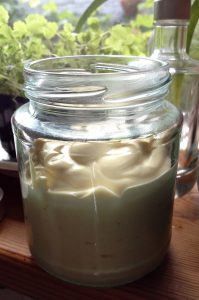 In the last few years there has been a huge increase in the amount of exciting and innovative vegan food being produced – there has never been more choice. Aquafaba provides a cheap and easy way to replace eggs – which is also great news for people with egg allergies. It provides a safe alternative for those wanting to avoid Salmonella poisoning, apparently less common in eggs than it used to be, but still a risk – especially to people with compromised immune systems.

Leading scientists have issued stern warnings about global food supplies, saying that the world’s population may have to switch almost completely to a plant-based diet to avoid catastrophic shortages. Consumption of animal protein at current rates is simply not sustainable. The new wave of vegan cooking provides an opportunity we can’t afford to ignore. Plant foods use less land, water and fossil fuels and produce considerably less greenhouse gases – and are infinitely kinder.

If you thought going vegan means missing out, think again, vegans really can have it all!